Arthur Twistleton Polhill-Turner was born on 7 February 1862, in Bedfordshire, to Captain Frederick Polhill-Turner MP and Emily Frances Polhill-Turner.[1] Emily’s family, the Page-Turner Barrons, were a wealthy aristocratic family, so according to custom the Polhills adopted Turner as a suffix to their own surname.

In 1902, Arthur and his missionary brother, Cecil, removed the “Turner” part by deed poll, “to suit the times.”[2] Arthur was the youngest of a total of three Polhill brothers, but he was by about the age of ten the same height as his older brother Cecil (1860-1938) and outgrew him as an adult.[3] The two younger brothers seemed to share a close bond with one another: they became missionaries together, as did their sister, Alice, and they co-wrote their (unpublished) memoirs together Two Etonians in China.[4] 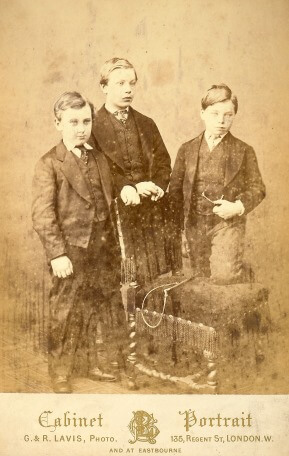 Arthur enjoyed sporting distinction at Eton and the University of Cambridge. At the latter he played football with the Old Etonians F.C, one of the best clubs in the country in those days. The Old Etonians won the All England Association Cup (later known as the Football Association or FA Cup) in 1879 and 1882.[5] Arthur was not in the squad on those occasions, but he writes in his memoirs, “I had the pleasure of touring with them round the North of England and Scotland. Anderson, Kinnaird and Rawlinson, the Goalkeeper, were amongst the team. We beat Sheffield and Edinburgh University, but succumbed to the Glasgow Queen’s Park and Dumbarton.”[6] Professional football was evidently in its infancy, “I was amazed at the way the Scotch Backs used their heads to strike the ball in mid air. It was rather new to us Southerners.”[7]

Arthur’s life changed in 1882 when an unrefined North American Evangelist, Dwight L. Moody, had the temerity to address the nation’s polished elite at Cambridge. Arthur writes of the time:

Mr D. L. Moody was a short thick-set man, with a broad American accent, and rather a dramatic manner, as he preached on Daniel, representing him as a man dressed in a frock coat, and carrying in his tail coat pocket a scroll and drawing it out with gusto, to the amusement of the Students, amounting to merriment…The last night…saw a wonderful change from the previous Sunday night; a crowded gathering, but so still you might hear a pin drop: a sense of awe and realization of the presence of God, no laughing or joking…the writer was drawn by the simple text Isaiah 12.2 and decided for Christ that night.[8]

The tradition in many wealthy families in Victorian times was that the eldest son would inherit the family estate, the second son would join the military and the third son would become a lawyer. The Polhill-Turners were no exception, but after Arthur’s conversion he transferred from law student to theology student i.e. from ‘Law’ to ‘Grace,’ “The tone of the College was indeed greatly changed. The great Law College, now might be said to be ‘under grace’. The tide of revival continued to rise for the two following years, to the great delight of the principal of Ridley Hall, Rev. H. C. G. Moule, afterwards Bishop of Durham. I had transferred from Trinity Hall to Ridley Hall.”[9]

Exactly how and when Arthur decided to become an overseas missionary in China, rather than a parish vicar in England, is not absolutely clear. Broomhall and Pollock suggest the decision came after being given a copy of Hudson Taylor’s China’s Spiritual Need and Claims by fellow student Montague Beauchamp, probably sometime in 1882.[10] Hudson Taylor (1832-1905) had founded the China Inland Mission (CIM) in 1865, but by 1883 he had returned to the UK for a recruitment drive. It is not unlikely that Arthur read Hudson Taylor’s work, but he would later write to his brother:

How well I remember the first time I heard of him [Hudson Taylor]. It was at Mildmay Conference 1883. The subject was the knowledge of God. He spoke at the close and said ‘Dear friends if you want to know God. You must go out to China.’ Little did I think that such would be my privilege. Yet now after 20 years in China I can thank God for wonderful revelations of Himself. What struck me about Hudson Taylor in conversation – was his quiet calm spirit – always bright and cheerful – so that one could hardly be unaffected by his presence. In fact Hudson Taylor’s interviews were regarded by CIM workers as almost irresistible. The troubled spirit departed and sunshine returned.[11]

Arthur also intimated that the principal of Ridley Hall, the evangelical Anglican Handley Moule, probably influenced him too. Moule’s two brothers, Bishop George Evans Moule (1828-1912) and Archdeacon Arthur Evans Moule (1836-1918), had by 1884 already been serving in China for many years with the Anglican Church Missionary Society (CMS).[12] This probably explains why Arthur had initially signed up to go to China with the CMS before switching to the CIM around November 1884.[13] Indeed Arthur, who became an ordained Anglican, retained a strong connection to the CMS even though he was technically a missionary of the CIM.

Arthur may have been the first of the Cambridge Seven to seriously consider mission to China, but he was not the first to sign up with the CIM. Dixon Hoste (the only member of the seven not to have actually studied at the University of Cambridge) holds that honour, having written to Hudson Taylor on the subject in July 1883; Stanley P. Smith, the son of a London surgeon, followed in March 1884; Smith then influenced the young Anglican curate William W. Cassels to join in October 1884; Smith also influenced the outstanding cricketer, C. T. Studd, named on ‘the Ashes’ trophy, to join in November 1884 and this in turn influenced Montague Beauchamp, son of Sir Thomas William Brograve Proctor-Beauchamp, to join soon afterwards.[14] It is likely, then, that Arthur switched from the CMS to the CIM after he observed his esteemed fellow students joining the CIM (all six men were present at a joint CIM-CMS meeting in Cambridge in November 1884).[15] He had probably, I suspect, received assurances that he could retain a connection to the CMS, as an ordained Anglican, while being a member of the CIM at the same time.

As for his brother, Cecil, Arthur had been encouraging him to become an Evangelical Christian since his own conversion at the Moody campaign of 1882.[16] By January 1885, Cecil too had decided to join the China Inland Mission. The decision of seven fit, young, well-connected men, giving up almost guaranteed lives of privilege and comfort in England for a hard life of itinerant mission work in unindustrialised rural China caused something of a stir (imagine the effect of the current captain of the England football squad announcing his early retirement to become an overseas missionary). They toured the nation’s universities and held rallies in large halls, entreating other young, intelligent men and women to become missionaries. The last of these on the eve of their departure, in the now-demolished Exeter Hall on the Strand, in London, had more than three thousand in attendance and was covered in The Times.[17] Arthur was just twenty-two when he left London with his brother and five compatriots for China, on 5 February 1885.[18] He would spend most of the next forty-three years of his life there. 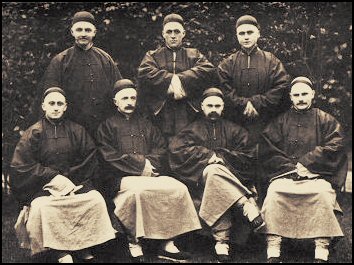 There are no less than sixty-eight letters in the collection directly from Arthur to his brother, as well as letters from his first wife Alice (née Drake). There are also several photographs of Arthur as well as the manuscripts and typed draft of the memoirs he co-authored with his brother: Two Etonians in China. Arthur was a keen amateur photographer, so his correspondence is often illustrated with photographs. For more information see:

“The Humble Fragment Full of Hope and Glory: Subscriptions to the Shuting Church and Mission Hall,”

“Let There Be Light: Arthur Polhill’s Photography and Social Reform.” 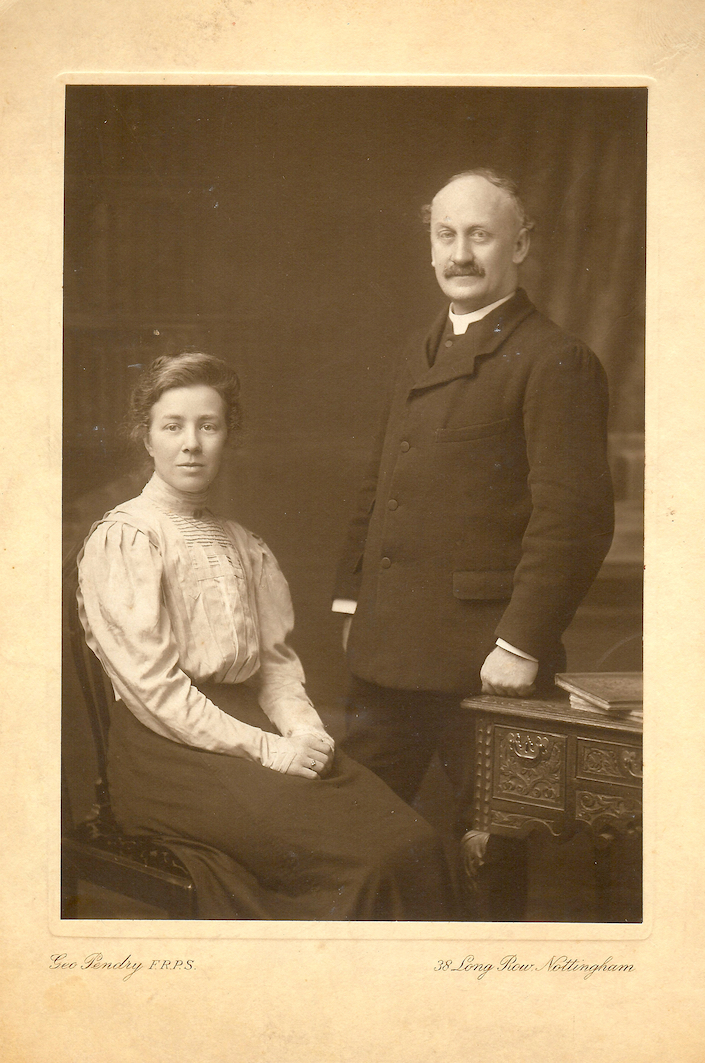 [3] He seems to have been about the same height as the eldest son, Frederick Fiennes (b.1858).

[4] Two Etonians in China: Reminiscences of Two of the “Cambridge Seven” Missionary Band (Cecil and Arthur Polhill) c.1925-6– Cecil’s chapters and some of the manuscripts have been digitised at the PCO < https://pconline.org.uk/about-the-collection> (accessed 18 March 2019), while Arthur’s chapters and manuscripts are in the PC.

[13] See “A Five Days Mission Relative to Work in Foreign Lands [12–17 November 1884]” flyer in the China Inland Mission collection, School of Oriental and African Studies library, Russell Square, London, UK [SOAS]. Arthur is listed at this meeting as a representative of the CMS.

[18] Technically, the Polhill brothers were not members of the CIM when they left London. The CIM London Council Minutes record, “it was proposed that they [the Polhill brothers] should proceed to China without formal identification with the mission which they could form after a time if on both sides it seemed desirable.” CIM Minutes of London Council, 13 January 1885, SOAS. But by May 1886, both brothers had written out by hand the Principles and Practices of the CIM (part of the first section of the CIM missionary exam), signifying their commitment to and acceptance to the CIM. A signed copy of the P&Ps, dated 25 May 1886 at “Hanchong” (Hanzhong), and countersigned by J. W. Stevenson (deputy director) is available at SOAS. For more on the study course for CIM probationers see Alvyn Austin, China’s Millions: The China Inland Mission and Late Qing Society (Cambridge: Eerdmans, 2007), pp250–4.